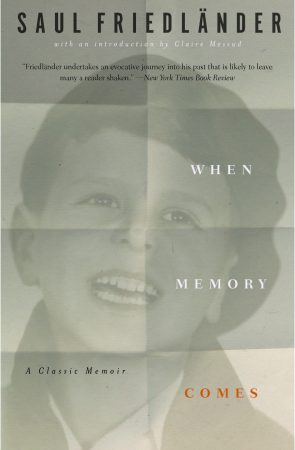 A classic of Holocaust literature, the eloquent, acclaimed memoir of childhood by a Pulitzer-winning historian, now reissued with a new introduction by Claire Messud

Four months before Hitler came to power, Saul Friedländer was born in Prague to a middle-class Jewish family. In 1939, seven-year-old Saul and his family were forced to flee to France, where they lived through the German Occupation, until his parents’ ill-fated attempt to flee to Switzerland. They were able to hide their son in a Roman Catholic seminary before being sent to Auschwitz where they were killed. After an imposed religious conversion, young Saul began training for priesthood. The birth of Israel prompted his discovery of his Jewish past and his true identity.

Friedländer brings his story movingly to life, shifting between his Israeli present and his European past with grace and restraint. His keen eye spares nothing, not even himself, as he explores the ways in which the loss of his parents, his conversion to Catholicism, and his deep-seated Jewish roots combined to shape him into the man he is today. Friedländer’s retrospective view of his journey of grief and self-discovery provides readers with a rare experience: a memoir of feeling with intellectual backbone, in equal measure tender and insightful.