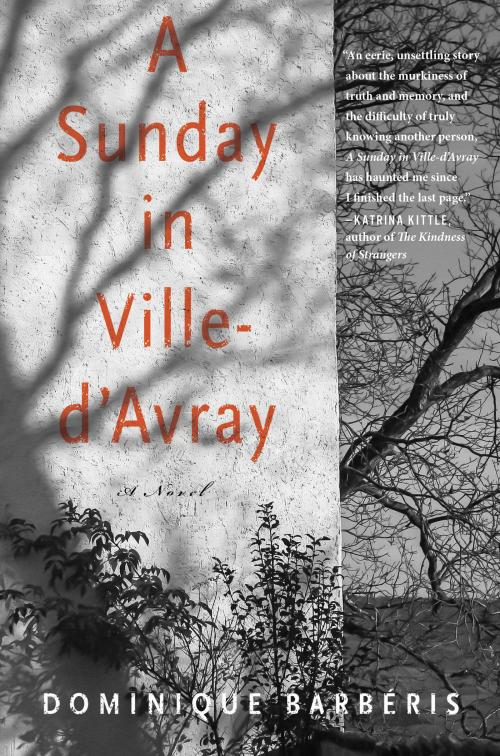 The other Sunday, I went to see my sister.

My sister lives in Ville-d’Avray, in the western suburbs of Paris. She shares a comfortable house with Christian, her husband, and their daughter: big garden, with lawns and flower beds, in a residential neighborhood. One of those streets that climb the hills near the Parc de Saint-Cloud. As I live in the center of Paris, we seldom see each other and I rarely visit her. Luc says, “Going to see your sister is an expedition.”

But that’s not true, the distance isn’t the only issue. I know very well that there’s regular train service to Ville-d’Avray. The truth is that Luc doesn’t like Ville-d’Avray, and that he finds my sister “boring”; it would be more accurate to say that he’s suspicious of her. Her husband Christian’s a physician in a group practice. For a brief time she was a high school teacher, like me, but she doesn’t work anymore. She helps Christian in his practice, in a vague sort of way. Sometimes, when he needs her, she fills in at the reception desk, treats people with ordinary symptoms over the phone, or directs anxious patients to the hospital, but that’s not what you’d call work. “And between us,” says Luc, “I don’t trust your sister’s ability to diagnose patients; she always seems to be ‘elsewhere.’ Your sister,” says Luc, “has never had her feet on the ground. It’s a family trait.”

As I was leaving Paris that Sunday, I calculated how many months it had been since we’d last spoken to each other, my sister and I. Luc was attending a seminar, or claimed to be attending a seminar. I had my doubts on the subject. To be more precise, for some time I’d been suspicious of his relationship with a woman from our circle of friends, Fabienne, an academic. In any case, I’d had enough of Paris; the city was hot and polluted.

The season was moving on. It was, I remember, a Sunday in the beginning of September, one of those days that cross the border between summer and fall.

Some of the houses in the neighborhoods I passed through were still closed up—proof that their owners hadn’t yet returned from summer vacation—but there were flowers in the gardens. Flowers blooming in untended gardens, all by themselves. You could sense everywhere, much more than in Paris, the sort of languid stretching and immobility characteristic of plants in the fall. There were fewer red roses than pale-pink ones—red roses, despite their more pronounced color and their stronger scent, don’t last as long. They seem to wear themselves out.
Maybe it’s the color that wears out the roses.

I passed a station, I don’t remember which one, where the people getting off a train from Paris stood out behind the railing that separated the platform from the street like figures silhouetted against a background of sky. You got the impression that they were hesitating, they didn’t know where to go. The train left again; it was typical of Sunday, all that, the degree of blankness, of slight uncertainty, of vague apprehension (connected to uncertainty) that characterizes a Sunday; I put on my sunglasses and told myself that despite the fine weather, despite what was left of summer, you could always recognize a Sunday afternoon.

On Sunday evenings when my sister and I were children and our family lived in Brussels, Mama was often nervous. Night fell faster than it did on the other days of the week, especially in winter, and it was preceded by a damp fog. We’d be brought to the park; we’d be required to walk around the lake, to “get some fresh air.” “Walk fast and breathe through your noses—if you don’t, you’ll inhale the dampness, you’ll get sore throats, and I have no intention of taking care of you.” We’d go up on the Japanese bridge and throw bread to the swans. Mama would watch us from a distance, clutching her fur collar tight with both gloved hands. On the avenue that bordered the park, the streetlamps would come on one by one; we liked the way those lights, magnified by the foggy mist, shone in the night; we could feel their chilly poetry, but on the way back we’d walk “as though we were walking on eggshells,” with a strange pang in our hearts. We knew what the rest of the evening would be like. It was the same every Sunday: when we got back home, Mama would reproach Papa, who’d stayed home to read the newspaper, for the boredom and the household chores with which marriage had filled her life. Those reproaches were exacerbated by our life in Belgium; our life in Belgium greatly exacerbated the Sunday evening anxiety in our home. For example, the neighbors in the apartment above ours, a Belgian couple (the Kacenelenbogens), were content with café au lait and tartines de cassonade, slices of bread spread with butter and brown sugar, for Sunday dinner. From this practice Mama would draw an argument: if we could only have been Belgians, real Belgians, free from French complications in matters regarding la cuisine, we would have eaten tartines de cassonade like the Kacenelenbogens, and she wouldn’t have had to tire herself out. She’d slam the kitchen door; she’d say that Sundays were unbearable, and that her life was a failure.

As for the neighbors below us (the Van Huysts), they had made some comments on the noise coming from the floor above their heads. We were required to wear slippers with felt soles inside the apartment. Sometimes we’d pretend to skate on the floor in the hall, as if on a Dutch canal. We’d go over our poems. Monday was recitation day, so we always went over our poems the night before. I haven’t forgotten the ones we learned; they seemed fitting for Sunday, for the gray, cloudy weather. There was the one that started, “Here’s the wind, the wild November wind,” and also one by Théo- phile Gautier called “Autumn Song”:

Rain bubbles on the garden pond.
The swallows gathered on the roof
Confabulate and correspond.

Reciting the poems gave me a delicate pleasure, delicate and a little sad.

Our apartment was very silent. The silence would weigh on us, and we’d ask permission to turn on the television set and watch Thierry la Fronde, Terry the Sling. In those days, like all the girls of our generation, we were in love with Thierry la Fronde; I’m tempted to say like all the normal girls of our generation, but sometimes I wonder if our childhood, my sister’s and mine, was normal.

No one’s childhood is really normal, I suppose.

Speaking of Thierry la Fronde, a good many years ago I saw the actor Jean-Claude Drouot onstage, in a performance of Chekhov’s play Uncle Vanya. Drouot played the title role, but it was hard to believe him. He wore the rumpled white linen suit that in the imagination of French directors represents the way Russian landowners dressed in summer on their birch-wooded estates. He had aged, which shocked me; even so, he didn’t look at all like a Russian landowner. He looked as though he was still roaming, with his jerkin, his sling, and his companions, through the forests of French public television (ORTF, as it was in our day). It was a weird feeling that lasted, in my case, for the whole performance, as if Chekhov’s melancholy had suddenly replaced the memory of our Sunday afternoons in front of the television.

I was sitting in the third row of the orchestra, and while the play was going on, I spoke to the actor in my mind. I said to him, You just can’t fool us.

(Or was it You just can’t make us forget?)

We had tender hearts and lots of imagination. Two or three years later, Jane Eyre’s alarming “master,” the formidable and gloomy Mr. Rochester, succeeded Terry the Sling. Rochester too appeared to us on the small screen one afternoon, in an old Hollywood adaptation of the novel. He made such an impression that I can still see him arriving, a horseman riding on the fog, his burly silhouette, his cape like a Gothic king’s, his curly black hair, which he pushes off his pale forehead as he asks, “Jane, do you find me handsome?”

The answer floored us: “No,” Jane boldly says.

That was surely on a Sunday (Sunday was television day). The living room was filled with late afternoon darkness. Crows were circling the chimneys of Thornfield; sounds of rattling chains echoed in the corridors. Our knees were weak, our eyes bulging, our mouths slightly open, when Mama opened the door: “Close your mouths, don’t slump on the sofa. Have you learned your recitations? I want to hear you recite in ten minutes.”

We were going to recite “The Wild November Wind” and “Rain bubbles on the garden pond.” But it was too late; the damage had been done; it would last. Thierry la Fronde, newly perceived as dull and scrawny, got tossed into the dustbin of childhood. Now we dreamed of being afraid; we dreamed of a gloomy man our father’s age, with wide nostrils, Orson Welles’s head (Welles played Rochester), and the look of a half-caste king.

There was one scene we were especially fond of: Jane’s spoiled wedding. It would suggest to my sister the scenario of a game that I describe here to give an idea of what our childhood was like (and which, naturally, I keep secret from Luc): it consisted in wrapping ourselves up in one of the transparent curtains that decorated the window in our room. This window, situated just above the radiator, overlooked the courtyard of our apartment building, a courtyard where there was absolutely nothing to see: some garages and the roofs of other buildings, bristling with TV antennas. Nobody could guess what we were doing. Or—to be fair—people outside could naturally suppose we were misbehaving. They could figure we were sunk in the glum and guilty boredom of children, the boredom of Sunday evenings.

Nothing was further from the truth: our hearts were pounding because we’d just put on our “wedding veils.” Unmoving and veiled, our noses in the sheer curtains, which smelled (I remember) like dust and new fabric, our knees hot from the radiator, singing softly (a diversionary tactic), we’d stand in spirit “before the altar,” betrothed, hand in hand with a gloomy, “olive-skinned,” no-longer-young man. “Does anyone know of an impediment to this marriage?” the priest would ask.

A voice would cry out from the back of the church: “Stop! The marriage cannot take place. Mr. Rochester has a living wife.”

“Proceed,” Rochester would say to the clergyman.

He’d bring us back to the manor house, squeezing our hands in his “grasp of iron.” He’d open the door to the hidden room, guarded by a certain Grace Poole, and reveal to us his secret: a woman kept under lock and key, a disgusting red-faced gorgon with unkempt hair, neighing like a beast, our rival.

“That is my wife,” he’d say; “Such is the sole conjugal embrace I am ever to know . . . And this is what I wished to have,” turning toward us, “this young girl, who stands so grave and quiet at the mouth of hell.”

That’s what we were doing, my sister and I, under the curtains on Sunday evenings. We were standing, grave and quiet, at the mouth of hell.