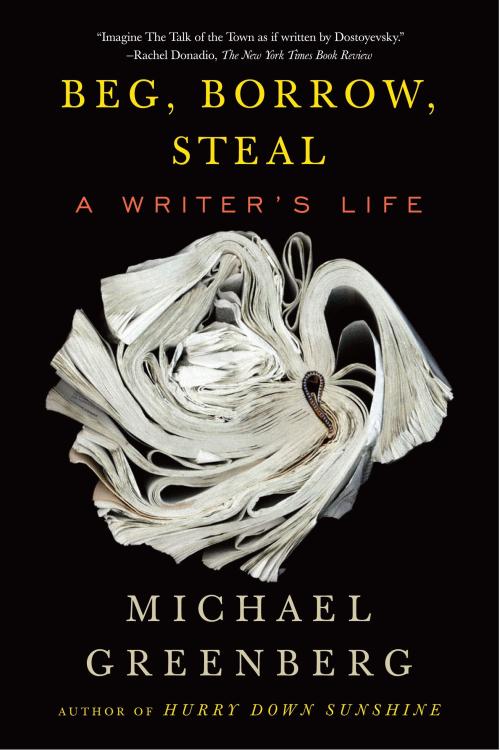 From the author of the critically acclaimed memoir Hurry Down Sunshine, Beg, Borrow, Steal is an autobiography in installments, set in New York, where the author depicts the life of a writer of little means trying to practice his craft, or simply stay alive. He finds himself writing about golf, a game that he never played; doctoring doomed movie scripts; driving trucks and taxis; selling cosmetics from an ironing board in front of a women’s department store; and botching his debut as a waiter in a coveted five-star restaurant.

Central characters include the City of All Cities; Michael’s father, whose scrap metal business looms large; his elegant mother; his first wife, Robin, whom he met in a Greenwich Village high school; their son, Aaron, who grew up on the Lower East Side; a repentant communist who fought in the Spanish Civil War; a Chilean filmmaker in search of his past; rats who behave like humans; beggars who are poets; a man who becomes a woman; and a woman who prefers to live underground. Greenberg creates a world where the familial, the incongruous, the literary, the humorous, the tragic, and the prosaic not only speak to each other, but deeply enjoy the exchange.

Praising Greenberg and his column in the New York Times, Rachel Donadio wrote: “Imagine The Talk of the Town as if written by Dostoyevsky.” This is an entirely original book, whose writing is magical
and whose insights are deceptively profound.

“In these 45 thoughtfully crafted short essays written for London’s Times Literary Supplement from 2003 to 2009, Greenberg (Hurry Down Sunshine) touches on his decades of trying to make good as a writer in New York City. . . . These are graceful ponderings by a deeply sympathetic soul, a consummate New Yorker and terrific writer.” –Publishers Weekly

“He found fame in 2007 with Hurry Down Sunshine, the excellent memoir about his daughter’s madness, but this city-bred boho and inveterate hustler has been at the writing game for years. In this collection of short columns, he again finds his material right in front of him. He visits a few odd places, like Hart Island, the most populous cemetery in the U.S. But most of these pieces are about New Yorkers–friends, neighbors, an ex-wife, former classmates from a Far Rockaway yeshiva. Greenberg’s literary snapshots come with a layer of grit: Some of these real-life characters are rude, eccentric, even quarrelsome. Thankfully, you get the sense that Greenberg wouldn’t have it any other way.” –TimeOut New York

“Beg, Borrow, Steal is a writing memoir that belongs in the company of like classics such as Grace Paley’s Just as I Thought, Annie Dillard’s Living by Fiction, William Gass’s Fiction and the Figures of Life, and Eudora Welty’s One Writer’s Beginnings . . . What is often thought of as an intangible, cerebral activity–writing–is made palpable in this book.” –ForeWord Magazine

“Greenberg’s descriptions of his encounters with mentors, his dealings with the movie world and his endless family dramas are rendered with biting humor and insight. The unflinching stories are so well written, readers will wince.” –Florida Times-Union