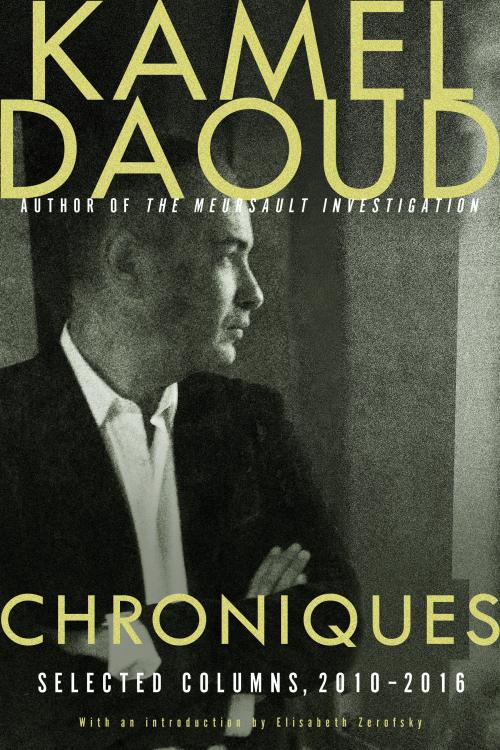 “Shrewd and sharp…These thought-provoking writings will appeal to readers interested in geopolitical events in one of the most troubled regions of the world.” —Library Journal“Nothing of Kamel Daoud’s exquisite prose is lost in translation in this brilliant English edition of his collected essays. Daoud is our interpreter and critic of the Arab—and by extension, Islamic—world, and no one, from the Islamists to the dictators to every rogue in between, is immune from his pointed jabs.” —Hooman Majd, author of The Ayatollah Begs to Differ

“Chroniques offers an astute and sobering critique of a region besieged by a fatalistic adherence to religious dogma and by tyrannical rule disguised as national stability. Kamel Daoud has the audacity to think differently, to confront Islamism and oppression, to reflect judiciously on a people and a region that he intimately understands, and to deconstruct the myth of an ‘Arab’ identity. Daoud’s acumen is matched only by his linguistic prowess and his use of elegant prose to unpack delicate and contentious questions of our times.” —Safwan M. Masri, author of Tunisia: An Arab AnomalyPraise for The Meursault Investigation:

“Stunning…an intricately layered tale that…nudges us into a contemplation of Algeria’s history and current religious politics; colonialism and postcolonialism; and the ways in which language and perspective can radically alter a seemingly simple story and the social and philosophical shadows it casts backward and forward.” —Michiko Kakutani, New York Times

“Rich and inventive…so convincing and so satisfying that we no longer think of the original story as the truth, but rather come to question it.” —New York Times Book Review

“A tour-de-force.” —The New Yorker

“What makes Daoud’s book so good is that, steeped in independent thinking, it offers an illuminating, if controversial portrait of today’s Algeria.” —Fresh Air, NPR

“A biting, profound response to French colonialism…Daoud’s prose is propulsive and charged. The pages glitter with memorable phrases.” —The Economist