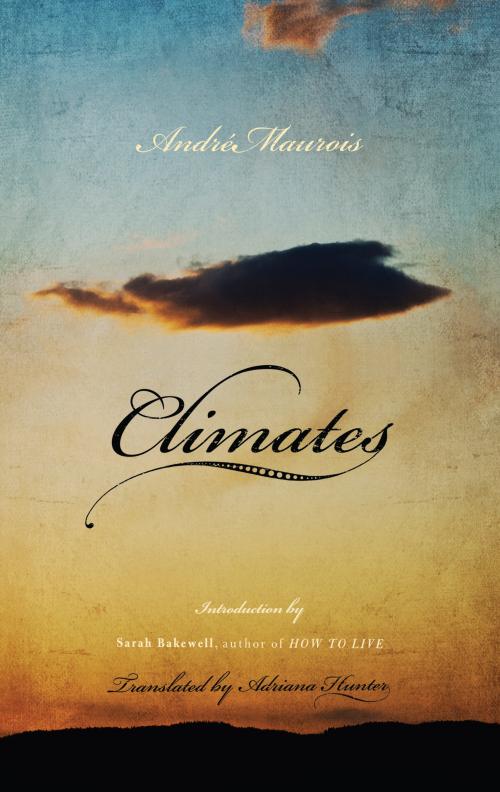 Written in 1928 by French biographer and novelist Andre Maurois, Climates became a best seller in France and all over Europe. This magnificently written novel about a double conjugal failure is imbued with subtle yet profound psychological insights. Here Phillipe Marcenat, an erudite yet conventional industrialist from central France, falls madly in love with and marries the beautiful but unreliable Odile despite his family’s disapproval. Soon, Phillipe’s possessiveness and jealousy drive her away. Brokenhearted, Phillipe then marries the devoted and sincere Isabelle and promptly inflicts on his new wife the very same woes he endured at the hands of Odile. But Isabelle’s integrity and determination to save her marriage adds yet another dimension to this work on the dynamics and vicissitudes of love.

“Stripped of its period shading, this is a sad and timeless tale of women on pedestals and the pain of loving not wisely, but too well.” –Kirkus Review

“This lucid new translation of a novel originally published in 1928 probes the timeless complications, betrayals, and fascinations wrought by love…With Sarah Bakewell’s (How to Live) introduction providing historical context and insight into the autobiographical nature of Maurois’s material, this new edition of Climates marks a valuable reintroduction to a neglected master.” –Publishers Weekly

“Climates…is orderly yet unsettling. It breathes an air that is profoundly civilized, but there is something violent and shattering about it, too. ‘Even when it’s mutual, love is terrible,’ says Philippe. It is terrible simply to be human–and there can be no subject more interesting to write about, or more beautiful, than that.” –The New Yorker

“This new translation by Adriana Hunter fully captures the elegance and frivolity of its era. It artfully preserves timeless questions about the nature of love, too. Marcenat[‘s]…quest for the right ‘climate’ for love shows the approach to be just as problematic nearly a century later.” –The Daily Beast