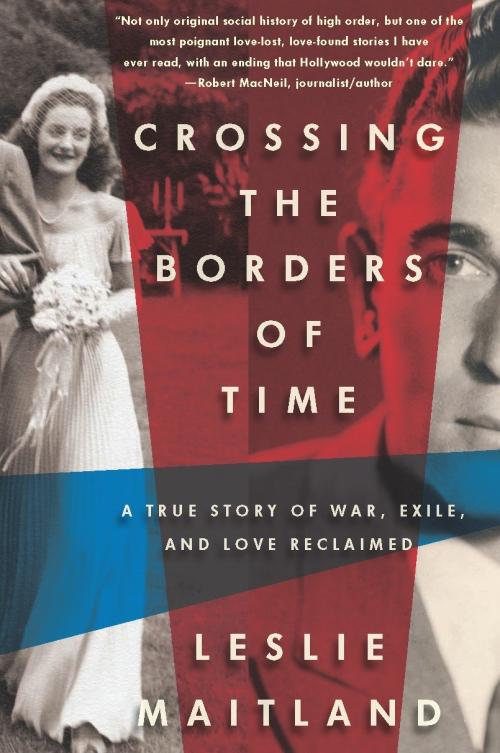 Leslie Maitland is an award-winning former New York Times investigative reporter whose mother and grandparents fled Germany in 1938 for France, where, as Jews, they spent four years as refugees, the last two under risk of Nazi deportation. In 1942 they made it onto the last boat to escape France before the Germans sealed its harbors. Then, barred from entering the United States, they lived in Cuba for almost two years before emigrating to New York. This sweeping account of one family’s escape from the turmoil of war-torn Europe hangs upon the intimate and deeply personal story of Maitland’s mother’s passionate romance with a Catholic Frenchman.

Separated by war and her family’s disapproval, the young lovers–Janine and Roland–lose each other for fifty years. It is a testimony to both Maitland’s investigative skills and her devotion to her mother that she successfully traced the lost Roland and was able to reunite him with Janine. Unlike so many stories of love during wartime, theirs has a happy ending.

“One of those sweeping, epic, romantic novels that seems tailor-made for the Oscars and a long summer afternoon. Except it’s real! Leslie Maitland has the rare ability to bring history, adventure, and love alive.” –Bruce Feiler, New York Times best-selling author of Walking the Bible and Abraham
“How the small flame of an undying love can illuminate the darkness of a tragic era. This elegantly told story is for everyone." –James Carroll, New York Times best-selling author of Jerusalem, Jerusalem and Constantine’s Sword
“Not only original social history of a high order, but one of the most poignant love-lost, love-found stories I have ever read, with an ending that Hollywood wouldn’t dare.” –Robert MacNeil, Journalist-author
“Maitland is a brilliant reporter who knows what questions to ask and how to get her story. Written with the precision of a historian, the result is a work I could not put down and scarcely wanted to end.” –Michael Berenbaum, former director of the Holocaust Research Institute at the U.S. Holocaust Memorial Museum
“A poignantly rendered, impeccably researched tale of a rupture healed by time.” –Kirkus Reviews
“This is a worthy testament to how war and displacement conspire against personal happiness.” –Publisher’s Weekly
“This is a fascinating story of thwarted love, longing, and the travails of one woman and one family within the broader context of war and persecution. Maitland includes a treasury of old family photographs and documents to enhance this incredible story of the gauzy intersection of memory and fact.” —Vanessa Bush, Booklist (starred review)
“[Maitland] writes with a clear, candid journalist’s eye and manages to remove herself from the story, yet place herself into the narrative at the same time. [She] writes…with insight and honesty. She closes this noteworthy read with poetic understanding and gentleness.” —Jewish Book Council
“Sometimes the truth is not ‘stranger than fiction’ but more compelling than fiction, and that’s the case here. Any reader who likes exciting World War II drama and a good love story will be drawn to this book. Well written and captivating, its story will stay with readers well after the book is finished.” —Library Journal