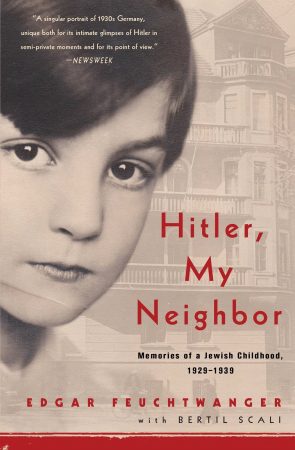 An eminent historian recounts the Nazi rise to power from his unique perspective as a Jewish boy growing up in Munich with Adolf Hitler as his neighbor.

Edgar Feuchtwanger came from a prominent German Jewish family: the only son of a respected editor, and the nephew of best-selling writer Lion Feuchtwanger. He was a carefree five-year-old, pampered by his parents and his nanny, when Adolf Hitler, the leader of the Nazi Party, moved into the building across the street in Munich.

In 1933 his happy young life was shattered. Hitler had been named Chancellor. Edgar’s parents, stripped of their rights as citizens, tried to protect him from increasingly degrading realities. In class, his teacher had him draw swastikas, and his schoolmates joined the Hitler Youth.

From his window, Edgar bore witness to the turmoil surrounding the Night of the Long Knives, the Anschluss, and Kristallnacht. Jews were arrested; his father was imprisoned at Dachau. In 1939 Edgar was sent on his own to England, where he would make a new life, start a career and a family, and try to forget the nightmare of his past—a past that came rushing back when he decided, at the age of eighty-eight, to tell the story of his buried childhood and his infamous neighbor.