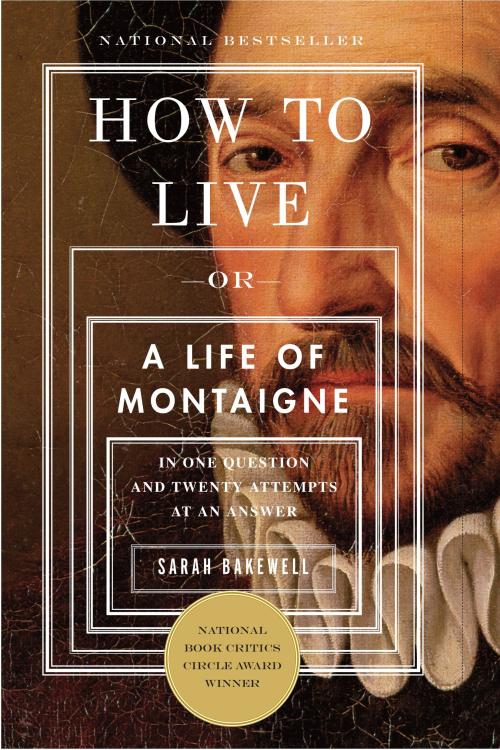 How to get along with people, how to deal with violence, how to adjust to losing someone you love–such questions arise in most people’s lives. They are all versions of a bigger question: How do you live? This question obsessed Renaissance writers, none more than Michel Eyquem de Montaigne, considered by many to be the first truly modern individual. He wrote free-roaming explorations of his thoughts and experience, unlike anything written before. More than four hundred years later, Montaigne’s honesty and charm still draw people to him. Readers come to him in search of companionship, wisdom, and entertainment –and in search of themselves. Just as they will to this spirited and singular biography.

“This charming biography shuffles incidents from Montaigne’s life and essays into twenty thematic chapters…Bakewell clearly relishes the anthropological anecdotes that enliven Montaigne’s work, but she handles equally well both his philosophical influences and the readers and interpreters who have guided the reception of the essays.” –The New Yorker

“Serious, engaging, and so infectiously in love with its subject that I found myself racing to finish so I could start rereading the Essays themselves…It is hard to imagine a better introduction–or reintroduction–to Montaigne than Bakewell’s book.” –Lorin Stein, Harper’s Magazine

“Ms. Bakewell’s new book, How to Live, is a biography, but in the form of a delightful conversation across the centuries.” –The New York Times

“So artful is Bakewell’s account of [Montaigne] that even skeptical readers may well come to share her admiration.” –The New York Times Book Review

“Extraordinary…a miracle of complex, revelatory organization, for as Bakewell moves along she provides a brilliant demonstration of the alchemy of historical viewpoint.” –Boston Globe

“As described by Sarah Bakewell in her suavely enlightening How to Live, or A Life of Montaigne in One Question and Twenty Attempts at an Answer Montaigne is, with Walt Whitman, among the most congenial of literary giants, inclined to shrug over the inevitability of human failings and the last man to accuse anyone of self-absorption. His great subject, after all, was himself.” –Laura Miller, Salon.com

“Lively and fascinating . . . How to Live takes its place as the most enjoyable introduction to Montaigne in the English language.” –The Times Literary Supplement

“How to Live will delight and illuminate.” –The Independent

“It is ultimately [Montaigne’s] life-loving vivacity that Bakewell succeeds in communicating to her readers.” –The Observer

“This subtle and surprising book manages the trick of conversing in a frank and friendly manner with its centuries-old literary giant, as with a contemporary, while helpfully placing Montaigne in a historical context. The affection of the author for her subject is palpable and infectious.” –Phillip Lopate, author of The Art of the Personal Essay

“An intellectually lively treatment of a Renaissance giant and his world.” –Saturday Telegraph

“Like recent books on Proust, Joyce, and Austen, How to Live skillfully plucks a life-guide from the incessant flux of Montaigne’s prose . . . A superb, spirited introduction to the master.” –The Guardian