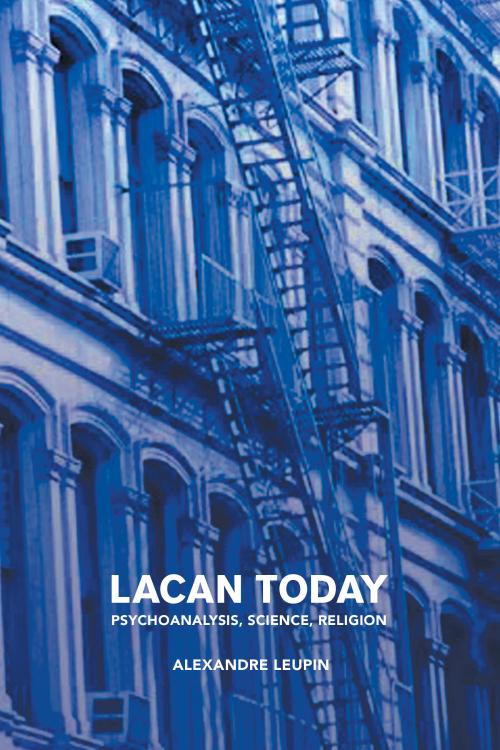 Lacan Today: Psychoanalysis, Science, Religion offers a lucid overview of the French psychoanalyst’s work. In five sections–"The Structure of the Subject," "Epistemology," "Four Discourses," "There is No Sexual Rapport," and "God is Real,"–the book maps out Lacan’s thought for the lay reader with unmatched clarity. It does this by building from Lacan’s graph and formulas, which are often misunderstood. This formalization acts as a pedagogical tool of wonderful economy, offering a broad overview without neglecting the essential details. The chapters are summarized by a general graph that visually demonstrates Lacan’s rigor and coherence.

The book examines often-neglected aspects of Lacan’s work, like problems in the history of science, epistemology, and religion, in order to show Lacan’s relevance to today’s world. It makes the case for Lacan as one of the most important thinkers of the twentieth century, whose reach extends beyond the discipline of psychoanalysis. Indeed, Lacan’s thought should lead readers into a reexamination of philosophy, literature, art, politics, economy, and desire.

In his introduction, Alexandre Leupin writes: "If the unconscious exists, then Lacan is the only twentieth-century thinker who has drawn the consequences of Freud’s discovery to their ultimate limits. I propose here what some will take as bombastic hyperbole: Lacan’s radical reevaluation of human thinking is comparable to Einstein’s."

Though Lacan’s thought is making tremendous inroads in countries of Latin culture, it has been slowly fading from public awareness in the English-speaking world. Often Lacan has been nothing more than a pawn in the bundling of contradictory doctrines labeled as "French thought"; or he has been reduced to a means of exchange between psychoanalysts or specialists in the humanities. Leupin’s contention is that what Lacan said or wrote is of interest to the general public and that his consignment to oblivion is reversible. This book demonstrates that Lacan’s thinking has vast implications, not only for college professors or practicing psychoanalysts, but also for scientists, epistemologists, and every man and woman.