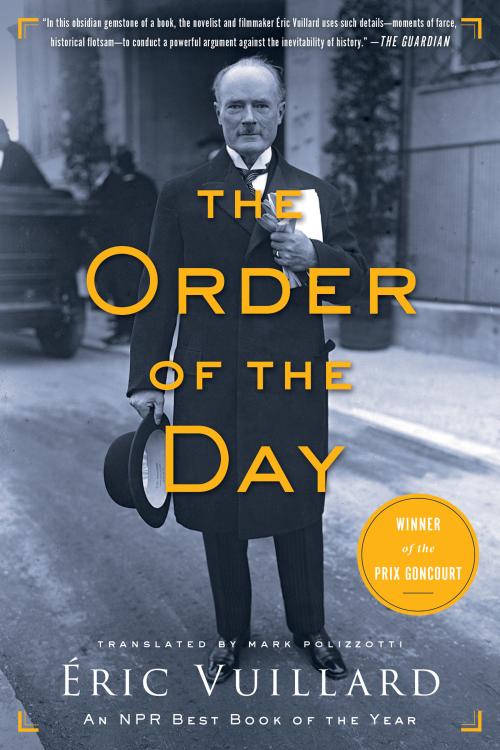 One by one, then, we could approach all twenty-four of these gentlemen as they enter the palace,
flit past their collar studs and the knots of their ties, lose ourselves an instant in the trim of their mustaches, zone out among the pinstripes of their jackets, plunge into their sad eyes. And there, deep inside that yellow, bristly arnica flower, we would always find the same little door; we would pull the bell cord and be transported back in time to witness the same string of underhanded maneuvers, marriages of convenience, double dealings—the tedious saga of their exploits. By that February 20, Wilhelm von Opel, Adam’s son, had brushed the motor grease from beneath his fingernails once and for all, put away his bike, left behind his sewing machine, and now sported a nobiliary particle that encapsulated his entire family history. From the height of his sixty-two years, he cleared his throat and glanced at his watch, then looked around him with pinched lips. Hjalmar Schacht had done his job well; he would soon be appointed Director of the Reichsbank and Minister of the Economy. Around the table were Gustav Krupp, Albert Vögler, Günther Quandt, Friedrich Flick, Ernst Tengelmann, Fritz Springorum, August Rosterg, Ernst Brandi, Karl Büren, Günther Heubel, Georg von Schnitzler, Hugo Stinnes Jr., Eduard Schulte, Ludwig von Winterfeld, Wolf-Dietrich von Witzleben, Wolfgang Reuter, August Diehn, Erich Fickler, Hans von Loewenstein zu Loewenstein, Ludwig Grauert, Kurt Schmitt, August von Finck, and Dr. Stein. We’re at the nirvana of industry and finance. There they sat, silent, well-mannered, and a little numb from having waited for almost twenty minutes. The smoke from their stogies made their eyes water.
As if in meditation, several shadows paused at a mirror and straightened their ties, making themselves at home in the small salon. Somewhere, in one of his four volumes on architecture, Palladio rather nebulously defines a salon as a living room, the stage on which we play out the vaudeville of our existence. And in the celebrated Villa Godi Malinverni, starting from the Olympus Room, where nude gods cavort among the trompe l’oeil ruins, through the Room of Venus, where a child and a page escape through a painted false door, you arrive at the Main Hall, where you find, on an architrave above the entrance, the end of a prayer: “And deliver us from evil.” But in the palace of the President of the Assembly, where our little gathering was being held, you would have searched in vain for such an inscription: it was not on the program. Not the order of the day.
A few more minutes dragged by beneath the tall ceiling. They exchanged smiles. They opened leather briefcases. Now and again, Schacht raised his gold-rimmed spectacles and rubbed his nose, tongue at the edge of his lips. The guests remained quietly seated, training their crab-like eyes on the door. Whispers between two sneezes. A handkerchief was unfolded, nostrils honked in the silence; then they shifted in their seats, waiting patiently for the meeting to begin. They were old hands at meetings. All of them sat on various boards of directors or of trustees; all were members of some employers’ association or other. Not to mention the sinister family reunions of this austere and stultifying patriarchy.
In the front row, Gustav Krupp fanned his rubicund face with his glove, hawked conscientiously into his hanky: he had a cold. With age, his thin lips were beginning to form a nasty inverse crescent. He looked sad and worried. Mechanically he twisted a beautiful gold ring, through the fog of his hopes and calculations—and it’s possible that, for him, those two words had but a single meaning, as if they’d been magnetically drawn together.